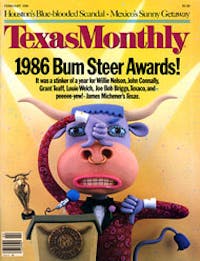 This is the season for livestock shows, and while those occasions provide arenas for exhibiting everything from roosters to pigs, it is the showing and judging of steers that draws the most attention. In the eyes of many Texans a well-groomed steer is a more glorious and awe-inspiring sight than a long, tall model in Oscar de la Renta’s latest gown. A beautiful steer can make people weep.

What exactly makes a pretty steer? The answer depends on the era, because steer fashions, like all categories of vanity, are subject to the winds of change. Twenty-five years ago a beautiful steer resembled a plush, reddish-brown, overstuffed divan; it was, in other words, a short, very fat Hereford. In the last decade or so the quintessential steer has been huge, black, and boxy, sort of like a limousine, which explains why one of the giant breeds that hails from France is called a Limousin. Some behemoths are the gorgeous color of champagne, indicating a Maine-Anjou bloodline, but regardless of color, giantism has prevailed. In the countless photographs taken in recent years of 4-H and Future Farmers of America kids with their prize steers, the youngsters’ heads barely crest the steers’ backs; sometimes you see only the kids’ legs.

Contestants go to great lengths to achieve the boxy look. By repeatedly shampooing, blow-drying, and hair-spraying a steer’s hide, a young cattleman can train the hair to fill a concavity where muscle and fat aren’t, much as a bald man can comb his hair to cover his pate. Another trick is to clip a square corner of hair on the steer’s rump and spray it with lacquer—it looks very much like a miniature mohawk—giving the impression that the animal’s backside ends not in a curve but in a right angle. Yet another gimmick is to dock the steer’s tail; a shorter tail creates the illusion that the animal’s legs are longer and hence that it is overall a bigger beast. If you dock the tail, you of course save the silky tassel, rat it, and reattach it to the end of the tail right before show time. I could find no explanation for such steer pom-poms. They are simply in.

Believe it or not, there was a rationale from which this giantism sprang. Remember that a steer is simply meat on the hoof—a walking T-bone, a peregrinating prime rib—and that making meat is what the cattle industry, and by extension the livestock show, is all about. The beautifully marbled, mouthwatering steaks that the plush ottoman steer produced were loaded with cholesterol—bad news for the arterial systems of humankind. The industry responded by introducing the large, lean European breeds—Charolais, Limousin, Chianina, Maine-Anjou. They caught on in the industry and in the Texas show ring because they fit the health bill.

But nothing stays the same. Revolt is imminent. The big, black boxes are becoming passé. There was a big hint—some observers called it a bombshell—last year when a smallish nondescript steer won grand champion at the Houston Livestock Show and Rodeo, the Paris of steer fashion. He was a black baldy. His mother was a Hereford, his daddy was an Angus-Chianina—not a genetic marriage that produces giants.

That unexpected turn of events sent shock waves through the Astrodome. Everyone had figured a Limousin or Chianina would win. One couple was so convinced of that probability that they spent roughly $17,000 on a Chianina steer for their son to raise, assuming the $100,000 or so he would win for grand champion would be a fair return. Such an investment strategy is not uncommon among parents of steer-happy kids.

Surprisingly, there are legitimate industry-related reasons for the shift toward the more petite steer. The packer put his foot down. These days packers butcher beef in various cuts and box the pieces, rather than sending swinging carcasses to supermarkets. It is an assembly-line process. Well, the big-boned steers won’t fit in the boxes, and the packers don’t intend to retool for the monsters, no matter how successful they are in the show ring. Just as important, the rancher and the feedlot operator have realized that it takes too much time and feed to grow big steers. They are not cost-effective creatures.

There have been complaints from industry types that the livestock show circuit has no basis in fact, which means, among other things, that thousands of young, impressionable Texans are learning all the wrong things about how to raise real cattle. If the compact model steer is becoming fashionable, as trends indicate, then the two worlds may begin to overlap. Of course, reality and paradigms are bound to be a little out of sync, but that just helps make life more colorful.