I’ve lived in Austin off and on for the past thirty years. My wife’s a Texas native. Our current home is Portland, Oregon, where—as you may have read—the barbecue’s not bad at all. But whenever we get back to Texas, brisket’s always a priority (along with breakfast tacos, Whataburger, and cream gravy).

Truth Barbeque in Brenham has been on our smoked meat wish list since it placed tenth on the Texas Monthly list in 2017, just two years after opening. But due to a death in her family, my wife, Susan Elizabeth Shepard, wound up getting there without me first. Susan’s Uncle Chuck absolutely would have expected her to side-trip for amazing barbecue on the way home from his funeral. And while she came back to Oregon suitably impressed with all the meats and sides at Truth, she also couldn’t stop talking about the Triple Chocolate Cake.

In this, she’s not alone. Truth, which opened a second, larger Houston location in January of 2019, might be the only joint in Texas where customers who show up later in the day don’t mind hearing that the meat is gone.

“Some people come in, and even if we don’t have barbecue, they’re like, ‘Oh, that’s okay,’ ” says owner and Pitmaster Leonard Botello IV. “ ‘I can just get cake.’ ” Also common: realizing there is no way you have room for dessert after filling up on brisket, sausage, corn pudding and mac and cheese . . . but there’s also no way you can leave without trying the cake. So you get a slice to go.

The cake’s cult following predates Truth, as Botello’s father, Leonard III, and his mother, Janel, ran Cafe Annice, a beloved restaurant in Lake Jackson, for years. There, family-favorite desserts that began with Janel’s own mother became restaurant favorites. When Botello IV decided to get into barbecue, with his parents helping out, he knew there would be cake.

“The cakes were a special thing that my mother had always done,” he says. “I always liked them, and everybody else always liked them. So I just really wanted that to be a part of [Truth]. A lot of people at barbecue restaurants have pies and banana pudding. I thought it would be a little more unique.”

In addition to the triple chocolate cake, you might find Italian cream, German chocolate, hummingbird, tres leches, strawberry, carrot, and the best-seller, banana caramel. All have three layers and all are as classic as you might find in a roadside diner, but with pastry-chef decadence.

Since her visit to Brenham, my wife has fantasized out loud about the next time she would eat Truth’s cake. At the time, we figured we’d be back in Texas soon enough. Perhaps in March, for South by Southwest. Or in May, before the weather got too hot. Or, worst case, in October, for college football and the Austin City Limits Music Festival.

Now, of course, we’re not sure when a lengthy trip to Texas might be in the cards. And since the 2020 Texas Monthly BBQ Fest is itself a stay-at-home event, this seemed like a good time to try and bake the cake ourselves. (Truth’s festival special, in case you’re wondering, is the mouth-watering Truth CenTEX Dog, a pepper jack chorizo sausage served on a buttered bun, with bacon, house-made relish, jalapeños, and picked mustard seed.) Lucky for us (and you), Botello was happy to oblige, while also scaling down the recipe for eight-inch cake pans—but you’ll still need three. Eat it with whatever barbecue you might be picking up this weekend. Or do as Botello IV himself does, and have it as an evening snack with a glass of red wine. 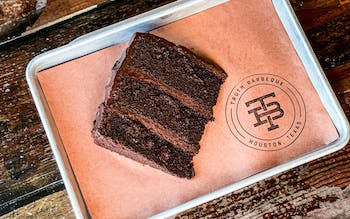