The first time Jerram Rojo encountered a radish was in the dirt. The bartender, who grew up in Marfa, was five years old and completely enamored of the vegetables growing in his grandfather’s garden—so much so that he decided to uproot every plant he could wrap his tiny fingers around.

“The garden was thriving,” he says. “There were carrots and radishes and all sorts of things like that. I remember pulling them all out. As a kid, you like the soil, and getting dirty, and tugging on the stems.” Rojo doesn’t recall returning to the garden after that incident. (His overeager plucking may have played a part in that.) But radishes were always present in the ground around him.

It wasn’t uncommon to spot the root vegetables sprouting from the desert earth throughout the spring, says Rojo, who now works at the Sentinel, a revered coffee shop, restaurant, and bar in Marfa. But their globular and vibrantly hued exteriors never appealed to him. “There was this weird stigma growing up in Marfa, at least with my friend group, where you didn’t eat the radishes,” he says.

But this all changed during a dare. The garden next to a barbecue restaurant where Rojo worked as a teenager was teeming with radishes. One day, his colleague challenged him to yank a crimson bulb from the ground and chomp down on it. Rather than spitting it out in disgust, Rojo was delighted by the vegetable’s crisp zing. He questioned why he hadn’t eaten them sooner. “It was delicious,” he says.

The Desert Plant & Pepper is a celebration of Rojo’s love of radishes and the soil from which they spring. “I wanted to make something refreshing and earthy that pays homage to the bareness of the Chihuahuan Desert and also the abundance that it brings,” he says. It’s made with sotol, a Mexican spirit often compared to agave-based mezcal. “Sotol mixes extremely well with lemon; the acidity brings out the earthiness of the spirit. And the radishes add a nice kick.”

Much like offerings on the menu at the Sentinel, the drink is fresh and playful. And while it appears as soft and alluring as a glass of pink lemonade, we suggest preparing your palate for a subtly spicy punch. 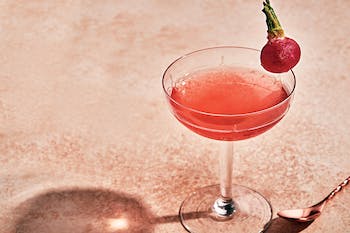 The Desert Plant & Pepper appears as soft and alluring as a glass of pink lemonade, but prepare your palate for a punch.
Servings 1
Print Share