Finn Walter, chef-owner of the Nicolett in Lubbock, attributes his love of eggplant to his childhood spent traveling in France.

“I grew up with a lot of Mediterranean cuisine,” Walter says. “I spent a lot of time in the south of France and experienced those Mediterranean flavors when I was very young.”

Walter recollects scarfing down the nightshade vegetable mashed up in baba ghanoush as well as roasted with a touch of olive oil—the way he and his wife prefer to eat it today.

“One of our go-to meals, like on Sunday nights when neither of us are working, is roasting a whole eggplant that we marinate in either coconut aminos or salt and olive oil,” he says. “We’ll roast it at high temperature until it turns translucent. The puddinglike texture that you get is fantastic.”

While a simple eggplant pudding sounds delightful, the recipe Walter shares for eggplant churros is a bit more involved (but just as delightful). He serves a similar dish at his fine-dining restaurant, which he opened in his hometown in 2020.

“We do a yuca churro at the restaurant, and we were originally serving it with a tamari–roasted eggplant butter,” he says. “We get our eggplant from a woman named Judy Briggs here in Lubbock; they’re beautiful eggplants.”

Once you’ve made your churros, squeeze fresh lemon juice on top and bask in the edible riches that summertime yields. 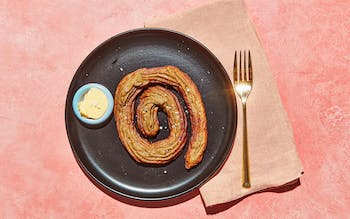 This two-day recipe from the Nicolett in Lubbock might be a bit of a project, but the result of crispy, melt-in-your-mouth morsels is worth it.
Servings 4
Print Share

This is ideally a two-day recipe: make the eggplant puree on one day, and do the frying on the following day.
Comment and Review