Pizza and soda were the pinnacles of cuisine for Rico Torres when he was a kid. But even though his middle schooler’s palate longed for sauce-drenched dough, his curiosity was stirred by the traditional Mexican food his family prepared in his El Paso home. The chef, who now co-owns the award-winning restaurant Mixtli in San Antonio, recalls marveling at the way plump fava beans melded with chile verde in his mother’s kitchen—the variants of green complementing each other in a whirl of savory wonder.

Fava beans, which can be harvested through May in Texas, are a source of pride in Torres’s family. The crop grew rampant on his grandfather’s plot of land in Fresnillo, Zacatecas. The property, nicknamed the Rancho, was home to roughly one hundred families, but Torres’s grandfather’s plot was special. “His crops were pushed up against the foot of a mountain,” says Torres. “And so, when it rained, he got the first of the water streaming down the mountainside.” Growing up, Torres heard stories of luscious watermelons, corn that was harvested and turned into masa the next morning, and his grandfather’s pistol, which was used for hunting rattlesnakes. The chef says it wasn’t uncommon to see chiles and fava beans growing together on the Rancho in the spring. This dish, Fava Beans and Riblets in Chile Verde, is an homage to the stories of those harvests, passed down from generation to generation.

The chef has since refined the cooking techniques he learned in his youth, and today, they’re on display in the food at Mixtli. The dish below is a weekend staple in Torres’s home. “We call it Slow and Low Sunday,” he says. “Me and my wife will start the meal early in the day, and then we’ll just forget about it and let it cook away in the pot until dinnertime.” At a glance, the recipe might look long, but keep at it—the steps are easy to execute, and the final dish is worth your time.

The result is a piquant celebration of spring abundance that’s certain to delight a crowd—maybe even a young family member with a curious palate eager to step outside the realm of pepperoni. 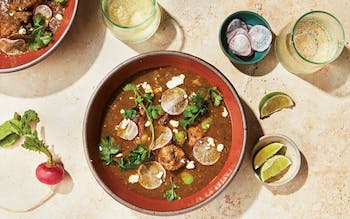